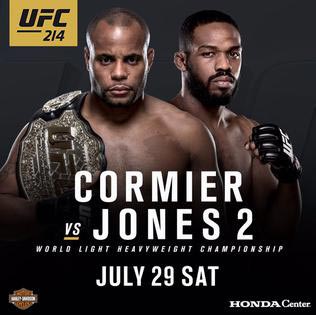 UFC 214 Cormier vs Jones 2 is one of the best cards of the year so far and you can stream it live and free with Kodi, Sportsdevil and Mobdro. The main PPV card starts at 10pm/7pm ETPT and has the strongest potential of any card to have 5 knockouts in a row.

Former champ and knockout artist Robbie Lawler takes on Donald “Cowboy” Cerrone to be next in line for a title shot. These two were scheduled to fight a month ago but Cerrone had to pull-out due to a blood infection.

Chris Cyborg takes on relative unknown Tonya Evinger for the title of the new Featherweight division being introduced into the UFC.

Stylistically, the most interesting matchup will be between the Welterweight champ and knockout king, Tyrone Woodley against a boa constrictor jiu jitsu artist Damian Maia.

Lastly, for the main event, DC takes on Bones Jones for the crowning of the true light-heavyweight champion. Jon Jones had his belt stripped and was suspended from fighting for a number of police related issues and failing a USADA mandated drug test that was later ruled to be from an erectile dysfunction pill he took. Regardless, Jones is back and he’s looking to regain what he believes is rightfully his. Daniel Cormier has asked repeatedly for the best Jon Jones. He’ll be getting exactly that at UFC 214, lets hope DC brings the best DC. Not the 206.2 lbs DC.

How Do I Watch UFC 214 with Mobdro on Firestick?

Watching UFC 214 live and free with Mobdro on a Firestick is very easy. The UFC pay-per-view events air in the UK air on pay cable channels like BT Sports2. The reason is because of the time difference. No one in the UK will pay top dollar for a PPV event that starts at 2am in the morning. So your easiest way to watch UFC 214 live on Mobdro is to find a BT Sports2 stream or a Sentanta stream.

Once Mobdro is installed you can search for Channels, or browse by categories. For watching UFC 214 live and free, search for UFC 214, or look for these channels: BT Sport, Fight Channel, Setanta, Kombat Sport and C More. All of these channels are overseas in the UK, Middle East or Russia and air UFC events on regular cable channels. Finding live streams of these channels are fairly easy and usually have good quality video.

Watch UFC 214 With SportsDevil on Kodi

To stream UFC 214 on Kodi, follow our simple steps to add SportsDevil: Install the new SportsDevil on Kodi

Make sure you’ve got a good VPN to help your buffering issues, gain access to overseas servers, and protect your anonymity online when streaming and downloading with Kodi or torrents. We use and highly recommend IPVanish which is only a few dollars a month and works amazing. Sign-up for a VPN and test to see how great it is.